Posted at 13:06h in Blog by Therxreviewer
0 Likes
Share

Gastroesophageal reflux (GER) is an involuntary retrograde passage of gastric contents into the esophagus with or without regurgitation or vomiting. Most episodes of reflux in healthy individuals last less than 3 minutes, occur in the postprandial period and cause few or no symptoms. Sometimes infants (0 to 12 months) spit up but do not have symptomatic reflux. About 50% of healthy 3- to 4-month-old infants spit up at least once a day, known as “happy spitting.” Most infants with asymptomatic GER grow normally and the condition often peaks at 4 months and resolves by 12 to 18 months of age.1

About 70-85 % of infants have regurgitation within the first 2 months of life, and this resolves without intervention in 95 % of infants by 1 year of age.2 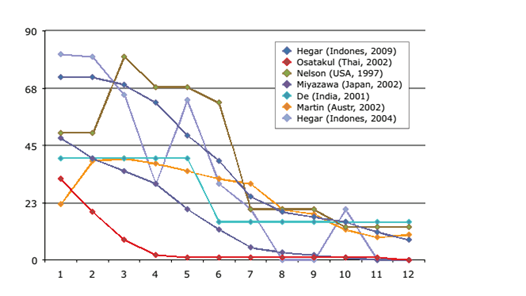 Another cohort study was performed in 216 healthy Thai neonates with a followup for 1 year. An infant who regurgitated at least 1 day per week was considered to have reflux regurgitation.4(To answer queries, pls refer to abstract at the end of this document)

In 145 infants, the prevalence of reflux regurgitation peaked at 2 months at 86.9% and significantly decreased to 69.7% at 4 months, 45.5% at 6 months, and 22.8% at 8 months. At 1 year of age, only 7.6% of infants still had reflux regurgitation. Most Thai infants with gastroesophageal reflux had mild symptoms: 90% of them regurgitated only one to three times per day. 4

In conclusion, the prevalence of reflux regurgitation in Thai infants was highest at 1 to 2 months of age; with most infants becoming symptom-free by 6 months.

Symptomatic GER can result in some feeding difficulty or refusal, irritability, and back arching.

Experiences from South East Asian studies suggest that a careful history and physical examination, with attention to warning signs, is generally sufficient to establish the diagnosis of uncomplicated GER.3

Prokinetic and Other Therapy5

Acid suppression and prokinetic medications have a limited role in the treatment of infants with regurgitation. They are not valuable in the treating children less than one year of age with uncomplicated gastroesophageal reflux (“happy spitters”)7 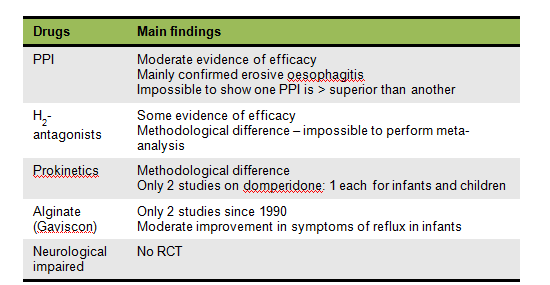 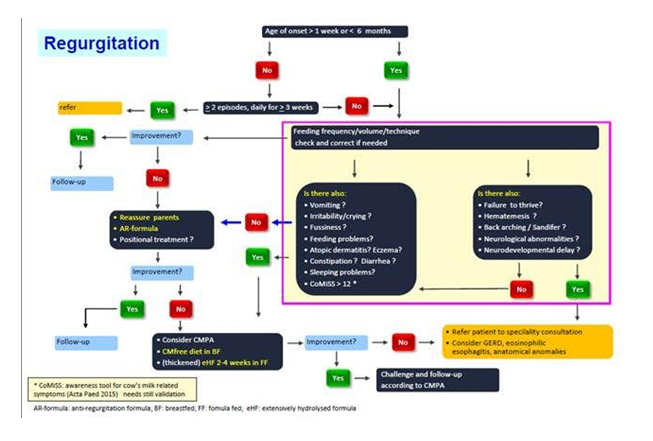 GER represents a common physiologic phenomenon in the first year of life. The distinction between this “physiologic” GER and “pathologic” GER in infancy and childhood is determined not merely by the number and severity of reflux episodes (when assessed by intraesophageal pH monitoring), but also, and most importantly, by the presence of reflux-related complications, including failure to thrive, erosive esophagitis, esophageal stricture formation, and chronic respiratory disease. The goals of medical therapy are to decrease acid secretion and, in many cases, to reduce gastric emptying time.

A cohort study was performed in 216 healthy neonates who attended the well-baby clinic of Songklanagarind Hospital between March and June 1998. All neonates were followed up, at regular well-baby clinic visits, for 1 year for reflux symptoms and clinical progress. Information concerning gastroesophageal reflux symptoms was obtained by interviewing the parents and from their diary records. An infant who regurgitated at least 1 day per week was considered to have reflux regurgitation.

The nature of gastroesophageal reflux in Thai infants differs from that in Western infants. The prevalence of reflux regurgitation in Thai infants was very high at 1 to 2 months of age; however, many infants became symptom-free by 6 months. The type of feeding (breast milk vs. bottle milk) had no influence on the prevalence of reflux regurgitation.